Margaret and Tom Meehan were Oregon State history professors for a combined 39 years, teaching countless students about the legacies of past people and events. The Margaret E. and Thomas R. Meehan University Honors College Professorship extends their OSU legacy.

Following Tom's military service during World War II, the couple met in graduate school at Rutgers University. After earning their master's degrees, the Meehans went to the University of Wisconsin for Tom's doctoral program. They then settled in Pittsburgh, where Tom taught at Carnegie-Mellon University and Margaret was a librarian. They moved to OSU in 1962 and spent the rest of their lives in Corvallis. 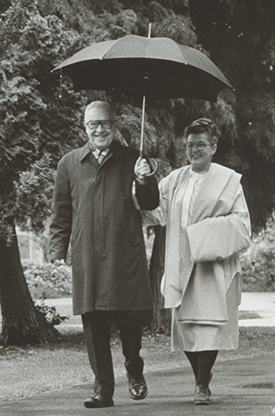 At Oregon State Margaret and Tom were each recognized as outstanding instructors and mentors. Thomas taught American history, specializing in the late 18th and 19th centuries. Margaret was initially a university librarian before joining the history faculty in 1972, where she specialized in women's history. She helped to establish the University Honors Program and served as its director from 1974 until her retirement in 1986, running the program on a shoestring. Tom, who retired in 1987, was among the faculty who volunteered to teach honors colloquia. He passed away in 2006 followed by Margaret in 2014.

The Meehans' impact at OSU lives on. They established an award recognizing teaching excellence in the College of Liberal Arts, and a scholarship in their names benefits history students. After their deaths, most of their collection of 8,000 books went to the university's libraries. They also bequeathed their house to Oregon State, and proceeds from its sale established the Meehan professorship.

[Yearbook photo by Scott Henjum '80: Strolling arm-in-arm or hand-in-hand, history teachers Tom and Margaret Meehan were a common sight on campus for nearly three decades, as seen in this image from the 1970s.]