While Bert Babb, ’55, will be remembered by many Oregon Staters for his impact on athletics, his service and generosity enhanced the entire university, leaders said following the May 1 death of the Eugene, Oregon, resident. He was 89.

The Bert and Shirley Babb Players Lounge in Goss Stadium recognizes the longtime boosters who, among many other gifts to OSU Athletics, provided the funds in 2002 to install lights for night baseball games. The lights were essential to having the Beavers host playoff games and have a shot at the College World Series. Babb’s father and one grandson played baseball for Oregon State; four generations of their family have attended OSU. 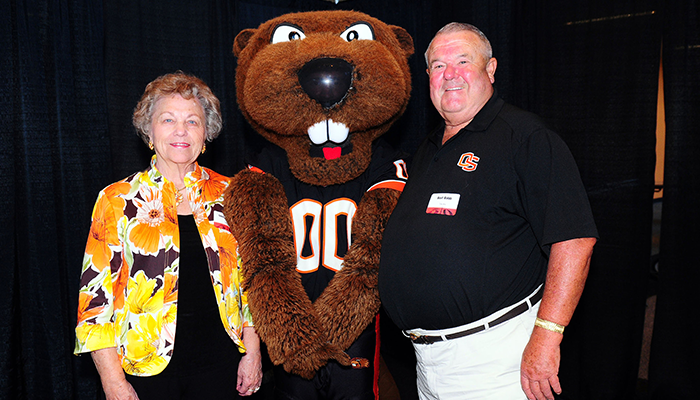 Beyond the couple’s generous gifts, Babb gave years of service to help student-athletes perform at their best. He was integral to the development of the former Beaver Club as a booster organization. He volunteered with multiple athletics fundraising committees in addition to his service as an OSU Foundation trustee, helping to build the CH2M-HILL Alumni Center, Valley Football Center and Goss Stadium.

“Bert was a booster among boosters – the archetype, loyal through and through. I just loved him, as did so many of his fellow Beavers,” said Shawn L. Scoville, president and CEO of the OSU Foundation. “He and Shirley were significant philanthropic leaders who always showed up for OSU. Their participation signaled a stamp of approval of the direction the university was moving in, and Beaver Nation paid attention. Bert’s legacy – all he accomplished through his volunteer leadership and very generous support – will live on. Our thoughts are with Shirley and their family.”

Babb attended OSU before joining the Army to serve in Korea. He then got a job as a box boy at a grocery in Eugene: the humble beginning of a career that eventually would position him as a prominent figure in the food industry and a member of the State of Oregon Grocers Hall of Fame.