In 1996 leadership provided by the Vegetable Commission and Oregon Food Processors established the Baggett-Frazier egetable Breeder Professorship to memorialize Professor William "Tex" Frazier, who died in December 1995, and to honor Professor Jim Baggett, who retired the same year. The professorship was created to recruit and support a renowned vegetable breeder who will continue the groundbreaking tradition begun by these two professors.

For 50 years, Tex Frazier served the needs of Oregon's agricultural community. An OSU professor from 1949 to 1973, this respected teacher and scientist touched many lives. With the aid of Jim Baggett—at first a graduate student and later afaculty peer in OSU's Department of Horticulture—he revolutionized Oregon's bean crop by breeding beans that grew on bushes rather than poles. These bush beans could be harvested inexpensively with machines instead of by hand, a necessity with the pole variety. Ninety percent of green beans grown in Oregon are a result of Frazier's and Baggett's research.

Professor Jim Baggett had an equally distinguished, 30-year career as a vegetable breeder at OSU. Along with numerous 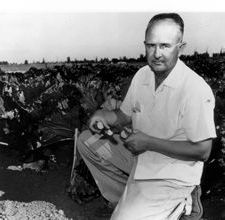 varieties of green beans, he developed new types of squash, peas, lettuce, and broccoli. Home gardeners all over Oregon are familiar with his tomato varieties, which include Oregon Spring, Oregon Star, and Siletz, a seedless tomato. He passed away in 2016.