Two of the university's most active volunteers and generous philanthropists, Lee and Connie Kearney of Vancouver, Washington, both started their careers at OSU.

Lee Kearney earned his degree in civil engineering from OSU in 1963. He worked for 32 years for Peter Kiewit Sons' Inc., 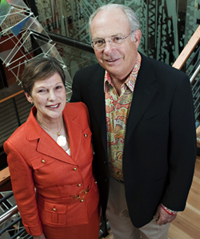 one of the largest construction and mining organizations in North America, holding several executive positions and serving on the Board of Directors. He was inducted into the OSU College of Engineering Hall of Fame in 2001.

Connie Kearney started her studies at OSU in 1961 on her way to an undergraduate degree from University of Washington and a law degree from Creighton University in Omaha, where she also later taught. She was the first female commissioner for Clark County, Washington, serving in this role from 1976 to 1980.

Lee and Connie served as co-chairs of the College of Engineering's Top-25 Campaign. Their other volunteer roles have included service on the college’s advisory board (Lee), OSU Foundation Campaign Steering Committee (Lee), and OSU Foundation Board of Trustees (Connie). They received the E.B. Lemon Distinguished Alumni Award from the OSU Alumni Association in 2008, and Connie was named a Lifetime Trustee in 2016. Kearney Hall was renamed in their honor after the couple gave $4 million to transform the 100+-year-old Apperson Hall into a modern home for the university’s civil and construction engineering program.

In 2010 the Kearneys committed $2.5 million to create two faculty position endowments in OSU's School of Civil and Construction Engineering. In 2019, the couple made an additional $6 million gift; half elevated the Kearney Professor of Engineering to the Kearney Dean of Engineering and half created OSU’s first endowed coaching position. The position is named after Pat Casey, who coached baseball at Oregon State for 24 years, leading the Beavers to 900 victories and three national titles.