Besides his family, David Montagne says the one factor that has impacted his life the most has been Oregon State. That’s what has inspired his transformational gift to the Completing Reser Stadium project.

“Reser Stadium is going to be the first glimpse of Oregon State that first-years get when they arrive for orientation,” he says. “It will provide a better gameday experience, and be the most functional stadium in the Pac-12. The health center that’s being built as part of the stadium will not only benefit the students but the community.”

Back in his sophomore year at Oregon State, Montagne decided to take a shot at mid-season football tryouts. Miraculously, he says, he made the team. He played wide receiver from 1984-86, earning a full scholarship and becoming team captain in the process.

“As a walk-on, you have to push that much harder and be that much better,” he says. “I didn’t take anything for granted.” 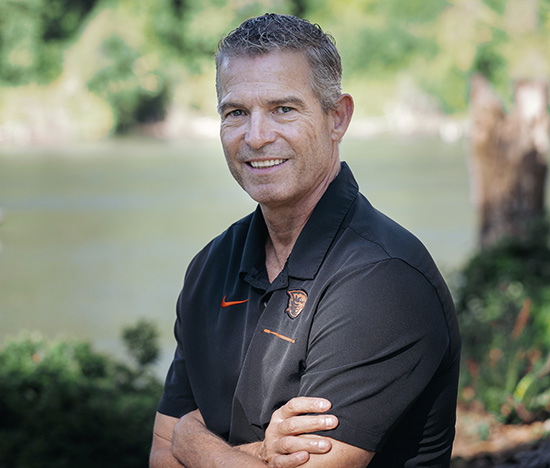 Montagne formed tight bonds with his teammates that endure to this day, made stronger by facing tough losses together. After earning his degree in speech communications from the College of Liberal Arts and a brief stint “going pro” with the Kansas City Chiefs, he went on to launch a real estate venture company based in the Willamette Valley called Montagne Development.

“Oregon State gave me the education and experiences that molded me into the person I am today, along with a core group of people to move forward with in life,” Montagne says about the reasons for his giving. He made his first gift when he was just out of college. “I’ve always said that I would pay my scholarship back if I ever could.”

After making gifts to the Valley Football Center and Goss Stadium, he decided to take his generosity even further. Along with 20 other donors, Montagne stepped forward with a gift of $1 million to the OSU Foundation to support the Completing Reser Stadium project. He was among the 12 donors whose gifts to this project were their first gift of $1 million or more to OSU. Montagne was inducted into the Milton Harris Society, OSU’s most significant donor recognition group, in fall 2021.

In retrospect, Montagne attributes much of the growth and successes he’s achieved throughout his life to the strong OSU community. “It’s important to remember what got you there in your life – that it wasn’t always just you. A lot of life is timing and luck. And the people you meet along the way.”

Learn more about the project at CompletingReserStadium.com